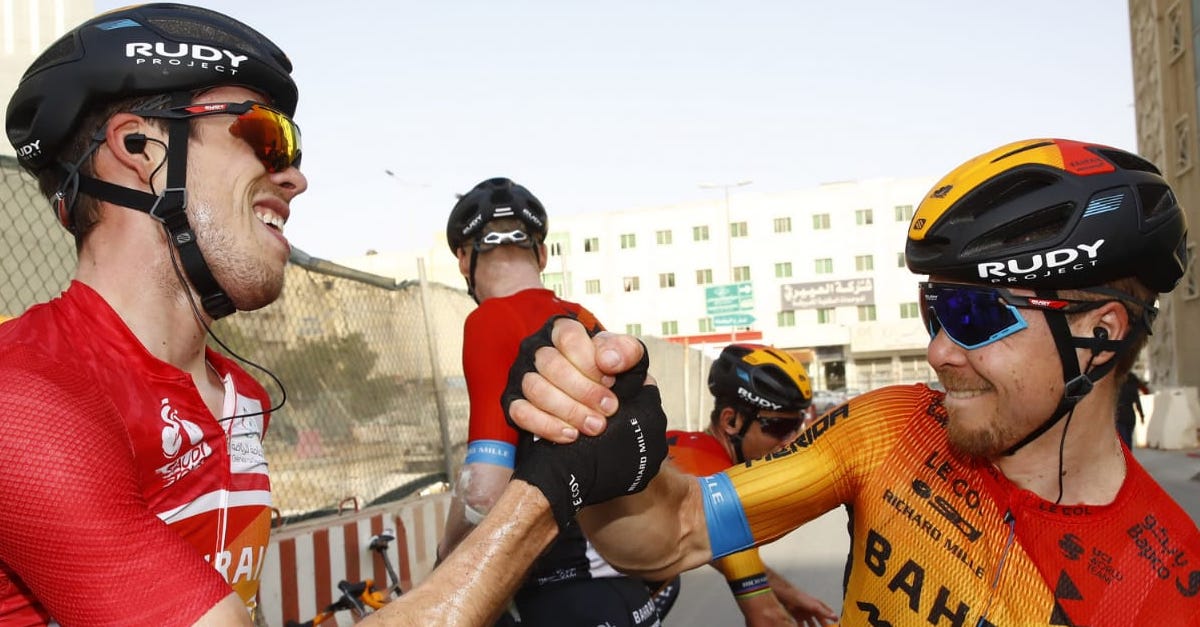 “It’s a new day. Let’s say it’s a mountain stage day after a few flat stages. The biggest fear of all riders which are not so good climbers. You might think that riders in grupetto (note: the last bigger group of riders on the race) are lazy or just want to rest. Well, sometimes that’s the case – you want to rest a little bit but that’s rare. Most of the riders in the back are fighting with themselves just to make it to the finish.

Let’s take a look at an example of a stage on the Grand Tour. 180 km and four difficult climbs, one of them starting right at the beginning. A lot of teams want to have a rider in the breakaway and that’s why the tempo is really high. Most of the team captains and good climbers use 70% of their power. Meanwhile, the rest – especially non-climbers are already using 110% of their power and it’s only the beginning. They are suffering and fighting to stay in the race. All those who are left behind on the first climb will have to make it to the finish with a grupetto. The effort they are putting in is as high for them as it is for leaders on the last climb, which means they have to go all out for the next 180 km. Sometimes I find myself in this group too. For example, after a few hard stages or if I was in a breakaway the day before. I can say it is mentally very tough because you never know when the time limit will hit you. You don’t want to go home. You fight with yourself for 180 km and hope that 35 min gap will be enough to stay in the race.

Luckily, I’m not so bad at climbing. I think I even improved in the last few years. I would like to make it clear that each rider, who starts a world tour race is a rider worth all the respect and admiration. A lot of people only see the winners, but we should also pay attention to the riders in the groups behind. These riders are domestiques, who gave it absolutely all in previous stages for their leaders, who brought them bidons, food, clothes, kept them safe from crosswinds, and generally just tried to keep the leaders as fresh as possible. Even though we all know that the next day can be one hell of a stage and we will be fucked, we all do it for the team. Here are also sprinters, lead-out guys, breakaway guys – we shouldn’t forget about them.

There also come days when everything is wrong. When you try to do your best, but you just can’t. You already did 14 stages and then you have a bad day. That is the last thing you want at that moment, especially if it’s a mountain stage. I’m having difficulties settling with the thought that it was just a bad day. I’m disappointed because I couldn’t help my team. I could just simply say “it wasn’t my day”, but I can’t. I feel like I let my team down. I usually feel ok with myself after a few hours when I realize I’m just a human being, who trains 100 hours per month to be ready for a Grand Tour (note: Giro d’Italia, Tour de France, Vuelta Espana). You have to be ok with the fact that sometimes your body has enough, and you just can’t push it over the limit. This isn’t a PlayStation. When those days come, you have to acknowledge it’s a “bad day”, still make it to the finish line in time, go on with the routine involving physiotherapies, dinner, maybe some team meeting, hope for a good sleep, and be ready to race again next day.

After a bad day comes a very difficult and long stage. For example, a 230 km long stage. You are nervous because you don’t know how you will feel. You have to set your alarm at 7:00 in the morning or even earlier. Wake up, still half asleep, your legs hurt, but you make it to the bathroom, where you hope you will be able to wake up more by washing your face with cold water. You roll the curtains and see it’s raining. However, the 230 km long stage is still on and unchanged.

You don’t realize when it happens but suddenly the Grand Tour is almost over and you’re counting the days down. Legs are hurting more and more every day and the tempo is the same or even higher. Each day same tasks, same stress, same fight for positions – 21 stages, each day 5h of full focus. Even just one small corner can cause your team leader a good result. Then there is the last stage. You can feel there is something special in the air. It’s a great relief when you cross the finish line. Then there is a podium ceremony for the first three riders and all the best in different classifications. I see all the riders who made it to the end as winners. I have great respect for all, for winners, climbers, sprinters, and those who are not so good at climbs because I know how hard it is just to be there. To cross the finish line in stage 21 is a great success. This means you made it through a lot of traps, cold weather, sometimes even snow, heat, difficult and narrow roads, corners, descents, and climbs.

I made peace with myself. I can’t win a Grand Tour because I’m not that type of a rider, and I don’t have the right genetics to do it. However, my qualities lie elsewhere. I can do a good time trial and I’m quick on shorter climbs like the ones on Belgium classics. I also know I can be a great domestique. That’s something you usually can’t see on TV, but it can be seen among us, riders. If I can help my team leader to be on the podium, then I’m extremely happy and proud. In the same way, captains are proud of us and grateful for our work. Even if we sometimes cross the finish line 45 minutes behind them, while they are already showered and ready for the next thing. In the end, we shake hands, thanks for your work, good job. I’m all ready and motivated for my work even more.

To conclude, I would like to point out – to make sure you don’t get the wrong impression – team leaders don’t have an easy job as well. They are the strongest in the race and have their own fights. I just wanted to introduce you to how it looks and feels like to be a domestique, behind the scenes, because that’s something I know best. In the end, leaders carry much more responsibility to deliver top results. We are just here to make it easier for them.”